The Evolution of GGR’s Glazing Robots 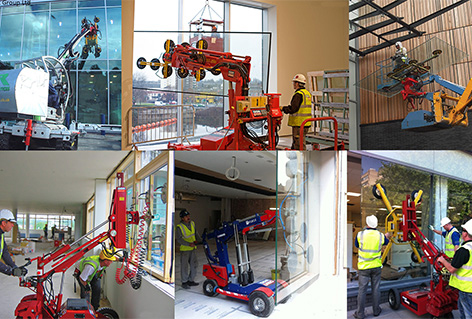 GGR Group has been a pioneer for glazing robots in the UK for 15 years since we created our first RALF machine. Before we discovered UNIC spider cranes, GGR’s innovative engineering team designed our first glazing robots so our customers could install glass in restricted access areas without using costly tower cranes, expensive scaffolding or larger mobile cranes which required road closures. Here’s a look back at how GGR led the way in bringing the latest lifting technology to the UK with these five glazing robots...

1999 – RALF (Robotic Articulated Lifting Frame) GGR’s very first glazing robot was the RALF, made by our own research and development team back in 1999. The 600kg capacity RALF glazing robot was designed to work outdoors and had hard wearing tracks so it could move over uneven ground. GGR’s engineers created the RALF’s robotic, multi-positional lifting head which was ideal for moving, tilting and rotating glass loads into the exact position required for installation. The prototype RALF robot was hired out for several jobs such as a glazing project at McLaren’s headquarters.  The machine has since been retired from GGR Group’s hire fleet.

1999 – EMU (Ergonomic Manipulating Unit)  GGR’s engineers used the RALF robotic vacuum head technology to create the EMU, a more lightweight and compact glazing solution which was designed to work indoors. The EMU could glaze buildings from the inside-out, using its glass manipulating head to push glass outside the building envelope then pull it back in for fixing. GGR’s machine was recognised by both the Design Council and Construction News magazine who gave it their Quality in Construction award. Since then a higher capacity 1000kg version of the EMU was created alongside bespoke lifting attachments for handling cladding and steel beams. After working on iconic projects such as The Houses of Parliament, Royal Opera House and the Tate Modern, this glazing robot has truly stood the test of time as it is still part of GGR’s hire fleet 15 years on!

2004 – HOMER (High Operation Mounted EMU Robot)  The HOMERtook glazing robots to new heights! This adapted version of an EMU robot was designed to be mounted onto a telehandler to make glazing at height and around overhangs simpler and safer. Developed in 2004 by GGR’s in-house team, the HOMER has taken on challenging installation work at the Liverpool Echo Arena, Museum of Liverpool, Manchester’s BMX Velodrome, Glasgow’s Riverside Museum and Chobham Academy in the Olympic Athlete’s Village.

2006 - Geko glazing robot  GGR introduced the Geko machines to our range of equipment in 2006, showcasing these compact pedestrian-controlled installation robots at Birmingham N.E.C’s Interbuild show in 2007. These wheeled glass lifting devices were a more portable alternative to an EMU which could fit through a doorway and lift units weighing up to 250kg and 350kg. Still available to hire and purchase from GGR, the Geko has remained popular with glazing and fenestration contractors as it provides a quick and simple solution to internal and external glazing work, the PV+ models even being able to install lift glass into an overhead position.

2012 – Oscar (Optimum Strength Compact Articulated Robot)  The latest addition to our range of glazing robots is our Oscar machines which offer the ultimate combination of compact dimensions, hydraulic articulated movement, zero-emissions and heavy duty lifting power for internal and external glazing. Exclusively available from GGR in the UK, we responded to industry demand for a more powerful lifting robot by launching the Oscar 280, Oscar 600, Oscar 600 Offroad and Oscar 1000 machines in 2012. With a higher lifting capacity than the Geko range for handling heavier units, the Oscars feature a telescopic lifting arm with articulated joint and a lateral sideshift function for  making slight movements without having to completely realign the machine. GGR recently bought a new Oscar 1000 which was a landmark moment for the manufacturers as it was the 500th model they have produced. Our Oscar robots have become some of our most in demand pieces of kit, working on over 220 projects since they were launched, including jobs at Edgbaston cricket ground, MediaCityUK, a Leeds police station and Heathrow Airport.

2015 – Watch this space!  GGR are always on the lookout for the next big thing in lifting technology so keep an eye out for the latest additions to our fleet of equipment for hire and sale. For more information about hiring or purchasing a glazing robot from GGR Group please contact your nearest depot where our friendly customer services team are on hand to help.